Warning: "continue" targeting switch is equivalent to "break". Did you mean to use "continue 2"? in /homepages/32/d115074550/htdocs/blog/wp-includes/pomo/plural-forms.php on line 210
 Tooling around with tourney odds

Tooling around with tourney odds

I don’t have any visions of grandeur with respect to my bracket prospects this year. But that doesn’t make figuring out ways to get an edge in my pool any less interesting. If anything, taking an informed point of view ensures you don’t finish last. But chances are most approaches don’t help you finish first either.

Every individual bracket theoretically implies a unique approach, but two common themes emerged from my research into winning bracket strategies:

Essentially, both approaches push the backeteer (making that one up) to find inefficiency in either the early or late parts of the tournament. Finding both inefficiency in both likely yields high rewards from high risk in the form of winning. And let’s be honest, who cares if you finish 4th or lower? So, looking at the data available this year, here’s how I’m going to play it.

First, ESPN publishes a nice data table summarizing the crowd and their picks. This data establishes a baseline sense of the preferences of those your competing against likely inherent in your specific tournament bracket. The distributions may be slightly different based on geographical and rooting preferences, but you should pay those no mind. This is about finding value.

Second, find a reliable data-driven ranking of the tournament teams. Ken Pomeroy publishes a ranking. Jeff Sagarin’s ratings on USA Today Sports work as well. You might prefer something else. No matter. You just need something empirical and objective based on a rigorous statistical analysis. It might even contradict your own intuition. That’s the point.

Now, here is where it gets interesting. How you chose to approach and use this information matters greatly. For example, let’s look at Louisville. The NCAA clearly under-seeded the Cardinals. But that’s not a helpful insight. Almost 10% of those filling out brackets picked Louisville to repeat, good for second place among all tourney entrants. So despite the Sagarin rating having Louisville as the second-best team in the tournament, the Cardinals offer no value. The crowd picked them already. Picking them might be a good play with the expected winner strategy. But now you have to dig out a handful of Sweet 16 sleepers. Very hard to do.

Playing the other strategy opens up some interesting opportunities. Consider the following table: 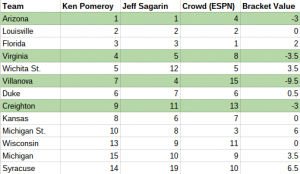 The teams highlighted in green – Arizona, Virginia, Villanova, and Creighton – all have a reasonable chance at winning the National Championship. Additionally, a negative Bracket Value (calculated by taking the difference between the crowd rating of the team and the average of the two ratings systems) suggests very few people will have selected these teams in your tournament. Positive bracket values tell us that the crowd values these teams higher than the ratings models. Not only are these teams likely to be common selected as champion in your bracket, they likely aren’t as good as some of the other teams available to be selected as champion.

Admittedly, this approach is very crude. But its a simple way to tease out inefficiency in your bracket pool and find “value” picks that could potentially payoff in a big way. I may be giving my strategy away. And if you and I compete in the same pool, you can use it against me. Because picking a tournament winner is still pretty much luck and more than 90% of us will likely be wrong. Just ask the smart guys at FiveThirtyEight.