Warning: "continue" targeting switch is equivalent to "break". Did you mean to use "continue 2"? in /homepages/32/d115074550/htdocs/blog/wp-includes/pomo/plural-forms.php on line 210
 Paper Lion still delivers 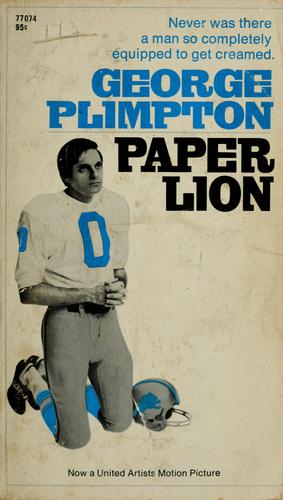 George Plimpton’s Paper Lion immediately discounts the notion anyone can step into professional sports and perform. The book also does little to reduce romance in the idea. Professional sports can turn intelligent and capable men into fanatics and fools. And the average fan will fool himself into embarrassing situations when it comes to sports.

Plimpton provides a view into a professional world many don’t understand in the book. And then goes right on proving to the reader an intelligent and capable man can fool himself into embarrassing himself. Caught up in the scene Plimpton takes part in a Detroit Lions intrasquad scrimmage with unfortunate results.

But the game is not the highlight of this book. Plimpton returns the reader to a time when the celebrity atmosphere associated with professional sports was more banquets and beer as opposed to champagne and clubs. This lack of pretense gives Plimpton unprecedented access from the Lions organization. He works forward from the first practice to the intrasquad scrimmage. His summer at Cranbrook practicing with the team serves as context.

Paper Lion offers everything one could hope for in a sports book. The machinations of the secretive operations of a professional football team. Candid glimpses into the performance anxieties of some of the world’s top athletes. Colorful and outlandish stories. Characters from a bygone era. Plimpton lays bare some of professional sport’s myths. Showing us athletes with a perpetual glance over the shoulder. Human beings with a fear that they’ll no longer be able to make a living doing something they do well.

This book is a must read for two reasons: 1. a time capsule into a different time in professional football’s maturation into America’s game; and 2. its exquisite journalism. Plimpton writes an accessible, educated prose. He turns the brutality of football into an intellectual exploration of the game. Bringing his literary credentials to the gridiron, Plimpton describes football’s participants as grand characters. Due to his background, his participation in football, almost immediately, feels out of place. And Plimpton does not hesitate to share his friend’s similar opinions with the reader.

Critics regard Paper Lion as standout example of participatory journalism and instant classic. And it is a great sports book with stories about working men talking about what they do for a living. Similar books have come to exist over the years, but Plimpton’s version broke new ground. A fan of the game and the NFL must find time to read this masterpiece. Almost 50 years later, Plimpton’s experiences with the Detroit Lions resonate. The game he chronicles appears indistinguishable from the version played now. It harkens back to a time when players worried more about how to make ends meet while playing a game.