Warning: "continue" targeting switch is equivalent to "break". Did you mean to use "continue 2"? in /homepages/32/d115074550/htdocs/blog/wp-includes/pomo/plural-forms.php on line 210
 Wentz aside, Browns front office needs more time.

After Wentz demonstrated incredible escapability while throwing for four TDs against a strong divisional rival on Monday Night Football, Browns fans decided the Cleveland front office is ill-suited for the massive task at hand. The team’s infatuation with “analytics” cost them a franchise quarterback. The number crunchers need to go. All the analytics and Ivy League degrees won’t help the Browns find a franchise quarterback. The 1-22 record says it all. But does it?

Set aside the Wentz debate, because, frankly, the Browns front office has moved on. They’ve wiped the slate clean. Fans should too. Rebuilding the Browns is not about a lawyer and baseball guy making football decisions. It’s about retooling an organization far behind its peers. And no 0-7 season, even on the heels of a hideous 1-15 campaign, should knock the Browns from their process.

Framework for Decisions
The baseball guy and the lawyer aren’t the only ones making player personnel decisions. The Browns employ Andrew Berry and Ken Kovash as VPs of Player Personnel. They oversee a department of 35 people responsible for the selection and development of NFL-caliber talent. Paul DePodesta and Sashi Brown aren’t calling all the shots. They’re building the framework for making sure the Browns build a sustainable approach to maintaining an NFL caliber roster – once they have it. And until they have a viable roster, they need picks. Lots and lots of picks.

But analytics isn’t just about who to select. It’s about the how. Teams can add, on average, 2-3 starting caliber players to the roster per draft cycle. Assuming the current Browns inherited five starters from previous regimes, it’d take the Browns between five to eight years to field a complete set of starters capable of winning in the NFL through a standard seven pick draft. Plan 2025 won’t sell season tickets. So the Browns have been on the lookout to accelerate the process with picks. They’ve been very public about it. My guess is that while they won’t publicly say it, this plan is about 2020 if they find success through their draft process and augment via free agency. 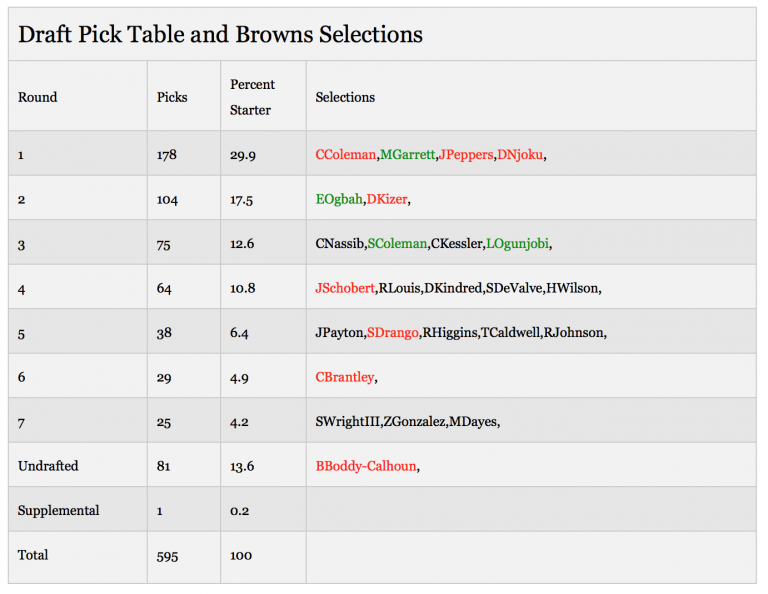 Evaluating Results
Consider the table above. The left side shows the probability of a player drafted in the round becoming a starter. Green players represent clear-cut starters for the Browns. Red players represent starting caliber players in need of some seasoning and/or development. After two drafts, the Browns added the equivalent of twelve starting caliber players. Slightly ahead of the expected six. On a roster of 53 guys, it can be hard to view this as progress. But it is happening. Albeit slowly. The front office tore this team down to the studs.

Still, the high-profile misses at quarterback, the skill positions, and free agency (Kenny Britt) have hurt the on-field product. Most teams hide and/or cut their mistakes. The Browns play them on Sunday have no choice but to play them for the immediate future. A closer look suggests the Browns might just be doing OK rebuilding the defensive front and offensive line. And in an accelerated fashion. But the process clearly needs to be reworked on the outside when it comes to defensive backs, wide receivers, and quarterback. In the end, the front office will be considered a success if they deliver the franchise quarterback this franchise so desperately needs. But this can’t be the only criteria.

What Next?
Three years to rebuild the Browns isn’t realistic. The Moneyball front office has to know this. No matter how painful this drawn-out process might be, it has to be done. And the bad deals need to be chalked up to learning experiences. No doubt it will take considerable time. At least five drafts. And probably one or two more Carson Wentz’s.